You can now play Resident Evil 7: The Beginning Hour. 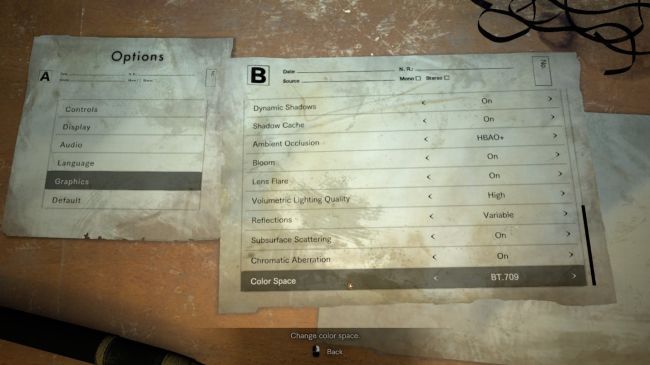 The Resident Evil 7 demo, The Beginning Hour, is available now on Steam. It’s important to note that it has its own spot in the store and may not be accessible on Resident Evil 7’s page.

As you can see in the picture above, the graphics options have been revealed prior to the demo’s release, and thanks to NeoGAF user Dusk Golem, we know exactly what the various options will consist of. It’s important to note that Bacon has announced that Borderless Window is unavailable for the demo due to a bug. He says that it will, however, be enabled in the full game.

Guns Of Icarus With PieCake Here.

What a night, here on of two half decent photos that I took,  you can view it here http://steamcommunity.com/sharedfiles/filedetails/?id=816100095#_=_

Then the following into the Description.

SparkGaming365 is a group of gamers that play games and do podcasts every now and then.

##Would you like to join?
All it takes is a 3 minutes, to fill out our form on our website.

After Add the Sparkgaming365 reversed logo.

Yes I know I havent uploaded for ages. But I have had a lot on my plate lately. I am still trying tomake an youtube update, hopefully all goes well.

Hi there, just to let you know we are near the end of completing the site. I must say it has actully been really fun, from the drawings to the coding. I hope this site will last for a very long time. So it is no longer under construction and is now accessable to the public. Beyond its faux Los Angeles murder playground, swiping satirical humour, and supercharged bank heists, Grand Theft Auto 5 and its Online counterpart play host to a thriving performance culture. Courtesy of the Rockstar Editor—introduced in concert with last year’s PC release—players in their droves have since crafted reams of dilettante television shows, documentaries and films—some which have been watched by hundreds, thousands and, on occasion, millions of viewers.

One particular community which has evolved alongside the series is the GTA stunt scene. Reaching back as far as 2001’s first three dimensional instalment, Grand Theft Auto III, this group of adventuring thrill-seekers came into its own in the following year’s GTA: Vice City. In the days pre-social media, forums and file sharing sites served as the easiest means to swap notes on the best stunting locations, and to distribute footage of the most prolific daredevils. By the time San Andreas arrived in 2004, the scene had established itself as a flourishing subculture, which has reached fever pitch via the latest instalment in the advent of social media, not least YouTube.

The plot follows the disappearance of a young boy, and a telekinetic girl who helps his friends in their search, while the boy’s older brother, his mother, and the town police chief start their own investigations. The show is set in the 1980s in the fictional town of Hawkins, Indiana.

Season 2 will hopefully be coming out in July 2017, fingers crosses. I have loved the first series and cannot wait to see the second, cannot wait for the couch-athon. Here I come. I may sound stupid or even nuts, but this TV Series is something not to miss. So what are you waiting for? Go and catch up…

On an Emmys night dominated by HBO and FX, one Netflix series still showed up big, even without winning any awards.

New things are coming to this website, we now have a social user account so gamer can now talk to each other and see who is online on our site, that bit is yet to come. So stay tuned for more info that is yet to come.

We are currently looking for new people to join our gaming crew as we are opening new doors to SparkGaming365. We are in the process of creating a radio station on our website. the head of the Radio is going to be George Eden, if over the next following weeks there are periods that the website it is down, please blame it on George!! As he will be trying to find the best method to make the radio/podcast work. Sorry for any inconvenience caused.

Hi guys thought we would let you know we are planning on going to this huge gaming event in the NEC Birmingham. Me (Jordan), Thomas and Elliot. Will attempt to vlog our trundle round. Feel free to catch us on the way round.